First of all, I’ve spent the last two months curled in fetal position due to work stress.  Not good.  While I’ve still be dressing like a Boss, I just didn’t have it in me to take pics and I looked like a sad Zombie Mom/Lawyer.  Grim shit.

This delightful tweed ensemble is the physical manifestation in my belief that you should ALWAYS SHOP.  Especially when you don’t “need” anything because that’s when magic happens.  I purchased the skirt at Nordstrom Rack about 2 years ago.  It’s Lafayette 148 and was originally close to $500.  I think I paid $40.  There was only the one, all alone and it had been kicking around for so long that it was basically free.  I wore skirt many times (it’s blue and black and tweed and hits below knee which is like all favorite things).

Then, about 6 months ago I was in the same Nordstrom Rack and saw THE MATCHING TOP.  How?  Why was this still here when clearly had not been in stores for years?  Was it lost in a back storeroom curled up under ugly sweaters and then someone found it and was like, “what the fuck, just put it on the clearance rack for $30 or something?”

No friends, no, this was not an accident.  This was karma.  And the whole thing goes great with a MK blouse I’ve had since law school.  These are the things that keep me alive.

Moral of this overly detailed shopping tale is that you should go consistently to your favorite stores because that’s when you’re likely to score really great shit at fire sale prices.  So go shopping right effing now.

BTW I made the kids pancakes for dinner. 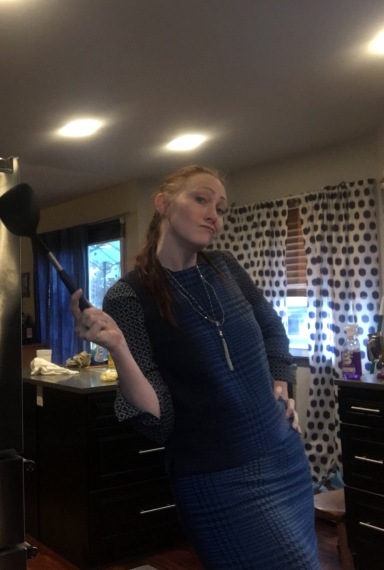