I vividly remember the first time I had Indian food.  I was a freshman in college and my best friend took me out to dinner with her parents who had been born and raised in Northern India.  The colors, textures, and flavor were completely foreign to my Colorado palate.  I knew my way around a burrito but bujii and biryani opened a new world to me.  It’s been 25 years (gag) and Indian food is now a mainstay in my diet.  Eternal thanks to Swati K. and family (I love you, weirdo).

After I got married and had time (and a captive audience) I started cooking more. I got pretty good if I do say so myself.  Every attempt to make Indian food– of any kind– was disastrous.  Inedible.  Truly awful. I couldn’t figure out why because I didn’t understand the fundamentals.

Quick: what would you grab at the store to make tacos from scratch?  What about a roast chicken dinner?  You probably grew up eating these things and know, instinctively, what goes in them and generally how they should be prepared.

The biggest mistake I was making in my horror-story curry was using “curry spice” which is NOT A THING.  The restaurants you love are not cooking with a bag of orange dust.

Here is a recipe for one extremely good dish that is versatile and not as hard to make as you think.  Totally worth it. This makes enough for leftovers which freeze well if that takes the sting out of the labor.

Oh and incidentally, this is vegan and gluten free, but just by accident. I literally had cheese and bread for dinner on Sunday.

Spices (look for the weird ones in bulk bins at Whole Foods, online, or at your local Indian grocery, which you should go in anyway because they are so fun) and smell each one as you add it so you start to figure out what is what.  Yes, it’s a lot of spices.  Yes, you need all of them.

Options:  if making a veg vindaloo, grab a few potatoes, a head of cauliflower, carrots etc.  If making non-veg, chicken breast or lamb stew meat works well (you can add veg to that as well).

Mix all the spices together in a dish while you heat the oil in in a large, heavy dutch oven, med-high heat.  You want  enough oil to coat generously and wait for it to liquefy and shimmer.  Add the spices and stir around letting them sizzle but not burn.  Dump in the onions, reduce to med-low heat and let slowly soften, 20-25 min, poking at them to prevent burning or sticking (below). 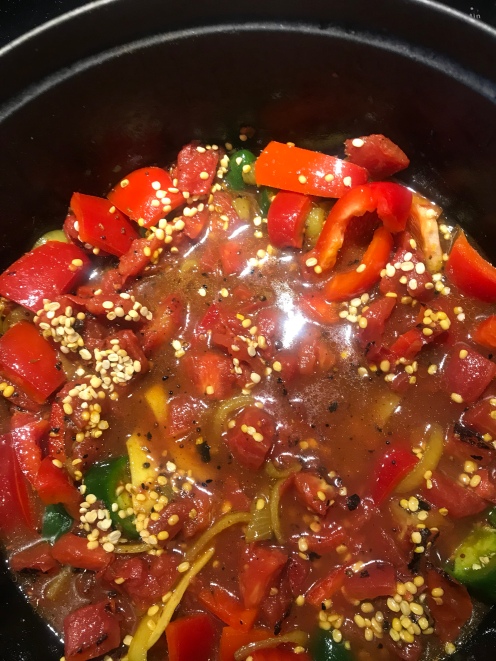 Add the peppers, garlic, and ginger and continue to cook a few minutes.  Add the tomatoes, lentils and 3-4 cups water, stir, and cover (above).  Cook at med heat for 30-45 minutes, until everything is mushy.  If it looks really watery, uncover and let some steam off.

Add the vinegar and chopped cilantro (stems are fine, no need to be precious about it) and get out ye olde immersion blender.  Blend until you have a thick soup with some texture but no large chunks.

If you are making a veg:  you can dump the uncooked veg (chopped to bite size pieces) directly into the pot, add a little water, and recover.  If you leave it on low for an hour or so, the veggies will soften.

If you are like, fuck this, I’m hungry, you can pre-cook the veggies by steaming or baking them while the sauce cooks.  Add the cooked vegetables and allow them to make friends with the sauce for about 15 minutes.

If adding meat (cubed chicken or lamb), it goes in the blended sauce uncooked. If lamb, I suggest browning the meat in a hot pan briefly before adding to the sauce for richer flavor.  With any meat, you will need to continue  30-60 minutes on low heat until the meat is cooked through

Either way, once everything is happily swimming around add the peas (about 10 min before eating).

Fun fact:  once the base sauce is made, you can easily move it to a crock pot for continued cooking of the “chunks.”

Well, it’s done.  You should have a giant vat of vindaloo.  Serve it with some rice (normal rice or make it extra good by adding a spoonful of coconut oil, two cardamon pods, half a cinnamon stick, and a pinch of tumaric to the water….) or some store-bought naan.

Bag and freeze the leftovers so one day when your cold and sad and tired you find it and are like “OMG yes.”